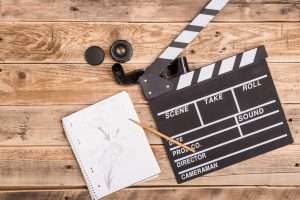 Want to learn how to read a script, storyboard a script, or write your own script? This class was made for you!

Film Narrative is an entry level course that will provide students with a fundamental understanding of screenwriting and storyboarding. Student will be introduced to the basics of film analysis, cinematic elements, script formation, and narrative structure. Students will develop skills in reading scripts, and bringing their own story to the screen.

Students will be studying clips from their favorite movies, as well as dissecting the full script The Chronicles of Narnia; The Lion, The Witch, & The Wardrobe. By the end of the semester, students will be equipped to put their own story into script and storyboard format. The next step, of course, is filming their own stories, but that is another class for another semester!

THIS COURSE IN OFFERED IN THE FALL SEMESTER ONLY.

PLEASE NOTE:   We are gauging student interest in this course before opening it for Registration.   If you would like to take this class, please click on the "I'M INTERESTED" button below. If we receive sufficient responses, we will endeavor to make the course available for the Fall 2018 term.

Brittany Scott graduated on theater scholarship from Concordia University Irvine with a B.S. in Humanities: Creative Writing. She worked professionally as a production coordinator and videographer in the Orange County/Los Angeles area before marrying the love of her life and starting a family. As an Orange County School of the Arts alumni, she was excited to teach Theater and Film conservatory classes at OCSA’s sister school, The California School of the Arts. And now as she transitions into homeschooling her own two children, she’s thrilled to join the CLRC team!

All materials provided by the instructor.